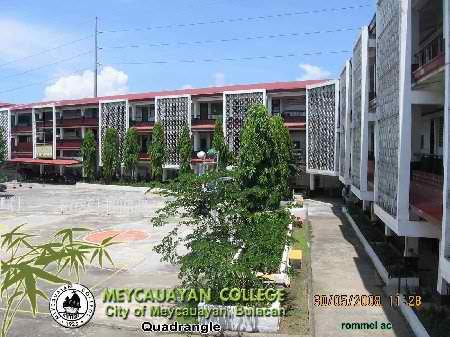 The year 1925 marked a significant event in the history of Meycauayan, for it brought the establishment of Meycauayan Institute – the first private high school in the municipality.

Founded by a few civic-oriented citizens, the Meycauayan Institute conceived in the ideals of service and dedication to the moral, spiritual, cultural and educational upliftment of the youth in the field of secondary education.

From its humble beginning in 1925, the Meycauayan Institute carried on with its mission. It was a continuous struggle for survival and recognition. The Board of Directors, the Administrators, faculty, personnel and the parents worked hand in hand for a noble cause. Their hopes were high, their aims lofty, and their purpose sincere.

In the mid-seventies, escalating transportation rates and prices of goods prompted parents to clamor for the opening of college courses to enable their children to pursue tertiary education at a minimal cost.

In June 1977, the permits to offer the first year curricular offerings for BSE, BSC, and AB were approved including two-year secretarial course. In 1980, the Meycauayan Institute was renamed Meycauayan College and in May 1981, the first college graduation was held.

The Department of Education, Culture and Sports granted the permit to Meycauayan College to open its Child Study Center in 1985. Consequently, the Elementary Department was established.

A few years later, in the tertiary level, new courses were added – Bachelor in Elementary Education (1987) and Bachelor of Science in Accountancy (1990), to replace BSC major in Accounting. In 1991, Banking and Finance Course was changed to Financial Management. In 1993, Master of Arts in Education major in Psychology, English, Mathematics, Administration and Supervision, Physical Education and Educational Management were offered to cater to the growing demands for graduate studies. In the era of modern technology, the college applied to open Bachelor of Science in Computer Science (BSCS) and was granted permission by The Commission on Higher Education in 1995.

From 1929 to the present, the Meycauayan College, has graduated thousands of alumni who have assumed respective positions in their chosen fields: education, business, computer technology and other industries. To honor those students who successfully passed the licensure examination, as Certified Public Accountants and Licensed Teachers, their names were etched in the wall of board passers.

The Meycauayan College cannot forget its founders, administrators, and all the people behind its growth and development. Its present administration pledges to move forward with its commitment to the youth and the community. Its mission and vision is geared towards meeting the challenges of times and is attuned not only with the needs and goals of the country but also with global requirements.

The College specifically aims that the graduates of Meycauayan College, having been nurtured in accordance with the mother-and-child philosophy and having been endowed with quality education as posited in the mission and vision of the school, would:

The growth in student population in the elementary, secondary and tertiary levels has imperatively demanded for an expansion of the campus, classrooms and other facilities, hence, the purchase of a 3-hectare lot in Malhacan, City of Meycauayan. It is now the site of “the Annex”, a four – story building housing the High School department, a privately managed canteen and a multi – purpose gym.

In the main campus, a three-story building was constructed where the multi-purpose hall is located.  The first and second floors are used by the pre-elementary and elementary students while the third floor is for the college students. In addition, the school has installed Computer and Science laboratories.

For better services, the school provides the following: Health Services, Guidance and Counseling, Student Services, Library Services, Records Management, Cash, and Accounting Offices.  And for spiritual purpose, a chapel is constructed at the Annex and a prayer room at the main campus.

These developments have been made to promote quality service and academic excellence.

The symbolic figure represents the beautiful Mother-Child relationship characterized by genuine concern, commitment and dedication. The symbol is in gold and green. Ever verdant, ever hopeful, ever shining with the promise of beautiful harvest despite all odds…this is what the resplendent combination of green and gold symbolizes. The school has continuously lived up to this ideal for over half a century and will continue to do so.